In late May 2003 I was in Cyprus, preparing rally driver Richard Burns to deal with the intense heat of the World Rally Championship rounds to be held in Cyprus and Greece (the two hottest in the calendar). We completed the training with a 'mini-triathlon'. It was tough in the 35 degree temperature but the week's heat acclimatisation training had worked. Richard was pleased with his overall improvement, in terms of cardiovascular fitness and his ability to work efficiently in the early Summer heat of Cyprus. This gave him the confidence needed for the upcoming Acropolis (Greece) and Cyprus Rallies the following month. 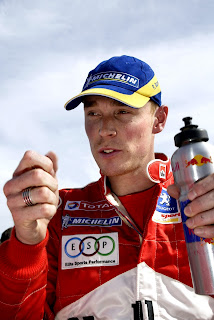 As we walked back to the team hotel, we talked about how far it was possible to push the human mind and body when striving for new challenges and goals, particularly in sports competition and preparation. Richard asked me what was the hardest thing I'd ever done.

I didn't have to think long: in 1985, I qualified for cycling's National Hill Climb Championship - an event where every last Sunday in October, 120 racing cyclists ride against the clock up a viciously steep and sometimes long, tarmac road somewhere in the UK. On this particular occasion the championship was held on Challacombe Hill, Woolacombe in Devon. It's just over 1500m long with half of it being a daunting 1 in 4 gradient. When it was my turn to tackle the climb, I made the schoolboy error of starting way too fast - adrenaline getting the better of me - and before the halfway mark I was already in serious difficulty. Not surprisingly my heart rate was already 'off the scale', my lungs gasping and my legs screaming for me to stop. Now that's nothing out of the ordinary if you're attempting to defy gravity and ride up a steep hill on a bike as fast as you can but I hadn't even reached the halfway point! The next 3 minutes tested me like I'd never been before or since - the crowd which had been vociferous and encouraging were now quiet even though their lips seemed to be still moving. I started to experience tunnel vision as well as spots in front of my eyes and I nearly came to a standstill several times as I zig-zagged, very slowly up the hill to the finish, over the line and into the arms of the marshals and St. Johns Ambulance volunteers. It took some minutes before I could be prised off my bike and regain some sense of where I was. It was then I realised there were a dozen other riders lying around the finish area in various states of self-induced distress - having just clawed their way up the same abominable hill.

Richard listened to my story and acknowledged the 'hardness' factor but his raised eyebrow gave me the impression that he was secretly thinking, "why?" and many would agree. Yet there are those of us who would simply say "why not?" or "because it's there!" Simon Warren's fabulous book "100 Greatest Cycling Climbs" provided the spark for me to take on not just one abominable hill but one hundred of them...

The cumulative fatigue of "rally driving" the route quickly, legally and safely, that connects all 100 climbs  will, I feel, become almost as big a challenge to deal with, but then, I think 'Burnsie' would approve, don't you think?

A GPS enabled map will hopefully be coming soon to these pages, so you'll be able to see the route and climbs as well as follow my progress as I travel round the UK.

I will be updating this Blog regularly over the next two months as I prepare and train for 100 Climbs In 13 Days. Please feel free to leave comments and spread the word.

Wish me luck - maybe I'll meet some of you on my travels - and I hope you can help me raise as much money for a great champion's charity, the RB Foundation. 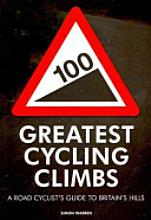 Steve Benton
Fleet, Hampshire, United Kingdom
I work as a conditioning and event preparation coach & consultant - predominantly in motorsport and pro cycling. I was Richard’s physical trainer from 1999 until his untimely death in 2005. In memory of a good friend I will be asking my 50 year old legs and lungs to get me up the '100 Greatest Cycling Climbs' in just 13 consecutive days. All monies raised will go to the Richard Burns Foundation. The projected start date is early May 2012. Further details available on upcoming blog entries.

A great blog and a great cause.

AND CHECK THESE GUYS OUT TOO!